I Will Miss Christopher Hitchens 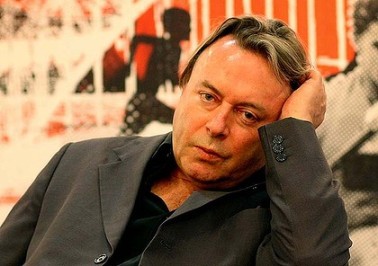 I do not believe in God. This is partially due to the manner in which my parents raised me. Although my father identifies as Baptist and my mother as Catholic, the one institution they always held in higher regard than religion was education, so I was always sent to whichever school they felt would give me the best advantage in learning. I attended parochial, secular and Jewish schools, and while my mother was very generous with sharing her faith, I never received marching orders from home about what to believe or not believe.

I initially believed in God because it was convenient, a socially acceptable invisible friend who listened to me when adults couldn’t understand, and sat with me whenever I felt alone. Later, as I began attending Catholic schools, belief became a reflexive survival trait. There were certain motions to be made in order to meet the standards imposed by my religious environment.

The subtlety of faith: note the shoebox nativity behind me, complete with three kings en route to deliver their gifts to baby Jesus

Then belief became a necessity outside of school. Familial hardship, no worse than what many go through, turned us all to prayer, prayer for guidance, for money, for jobs and for a sense of love to return to our home. Every time there was a respite from the hardship, there was much laughter and back slapping; God had answered our prayers. END_OF_DOCUMENT_TOKEN_TO_BE_REPLACED

Posted in The Manifestos of Don Manifesto