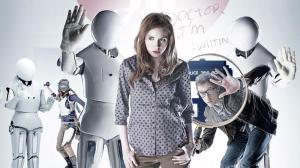 Last week’s “Night Terrors” was crafted as kind of a standalone episode, which, as a follow up to the very mythology-laden “Let’s Kill Hitler” left the panoply of previous questions largely unanswered.  One point of popular concern that has risen up involves specifically “the Ponds,” Amy and Rory Williams, and how they will be reacting going forward to the current state of their daughter Melody Pond/River Song, who is now a fully grown adult and living off on her own in the distant future.  After no reference during the last episode (which, it’s pretty well understood, was written for the first half of the season and then produced later), many have wondered if there will be attention paid to their state of mind, or if it will be awkwardly ignored like the proverbial 800-pound gorilla.

Let’s talk about Amy Pond, shall we?

For those not yet familiar with the history of Amelia “Amy” Pond (Karen Gillan), she has been the constant companion to the Eleventh Doctor (Matt Smith) since his first episode (Season 5’s premiere “The Eleventh Hour”).  Introduced initially as an eight year old (who mysteriously doesn’t seem to have any immediate family), she first meets the Doctor when his TARDIS (damaged by the energy given off by his regeneration) crash lands in her backyard.  After promising to return “in five minutes” and lead her off to a great adventure (which would be a cover to find out why she seems to be at a convergence for a major temporal event called the Fall), the quick jaunt in the TARDIS “to get the kinks out,” propels him instead twelve years into the future.  When he returns, Amy Pond has grown to adulthood after a lifetime of believing in the “Raggedy Doctor.”   After helping the Doctor save the world, however, her childhood dream finally comes true: she becomes the Doctor’s new companion, following him throughout space and time, and helping  him fight monsters and save the world (as any good companion should).   Because of how long she ended up waiting for him to come back, the Doctor has often referred to her as “Amelia Pond – the girl who waited.”  After a few episodes as the sole companion, in a move that was considered a little controversial, Amy’s fiancé, the good-hearted but awkward Rory Williams, became a third companion (and sometimes, admittedly, a third wheel).  Last season culminated with Amy and Rory’s wedding, and as a couple have been with the Doctor for the entire season so far (well, not counting the fact that Amy was kind of clone…but you get the idea).  END_OF_DOCUMENT_TOKEN_TO_BE_REPLACED