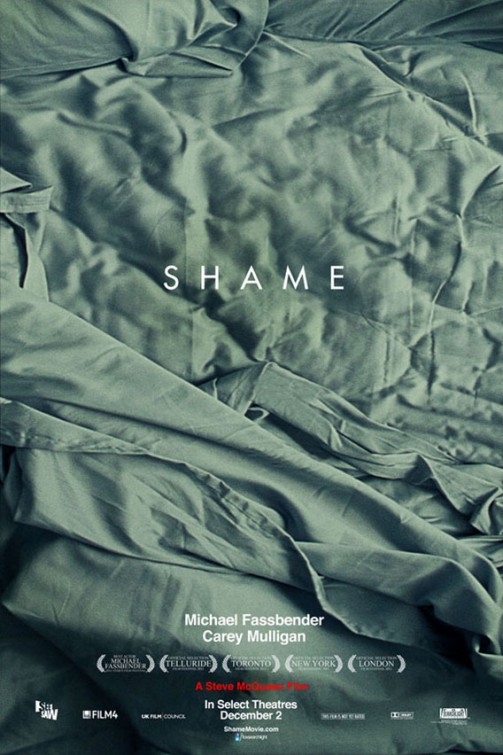 In Steve McQueen’s Shame we see a moment play out that we’ve seen in many films before it: the protagonist hitting rock bottom. For Shame, the protagonist is a wealthy, gorgeous white man whose rock bottom is having beautifully lit sex with two gorgeous women at the same time. It’s a testament to McQueen’s direction, Harry Escott’s score and Michael Fassbender’s performance that the scene isn’t laughable, but instead a moment of pained surrender that seems to punctuate a lifetime’s worth of addiction.

It is a sex addiction, one with which Brandon has seemingly lived without incident for years as he pursued some anonymous corporate career in midtown Manhattan. There is certainly little for it to distract from outside his work; when he’s not paying for high-end sex or picking up girls from bars and clubs, he’s enjoying mid-day masturbatory bathroom trips and late nights with left over Chinese take-out, beer and porn. Yet as appealing as all that sounds, it’s upon the unexpected moving-in of his significantly more extroverted sister, Sissy, that we begin to see how deeply rooted his need for sexual release is. Not only does her presence prevent him from engaging in his usual escapades at home, but he’s also confronted with what is most likely the cause of his addiction: their sexual relationship.

To be clear, nothing is consummated on screen, and the script never spells out what did or didn’t occur before the events of the film. It doesn’t need to. Aside from Sissy’s comfort standing in front of Brandon naked, and willingness to jump in bed with him and cuddle in the middle of the night (after sex with his boss no less), there is also the incident where she accidentally interrupts him masturbating. Angered, he comes out of the bathroom wearing naught but a towel and wrestles her onto the couch. He straddles her and the towel falls off as she laughs and bucks. But he’s serious, demanding from her an explanation as to why she keeps interrupting his life. The pleasure turns to pain and she screams to let him know that he’s hurting her before he finally leaves the room.

Regardless of whether anything sexual ever happened between them, it’s still abundantly clear that the emotional relationship between them is sexual in nature, and would have been consummated had it not been for their familial connection. Of the two of them, Brandon is the most acutely aware of this and it is from that awareness that I think the titular shame arises. He covets his sister, emotionally and physically, more than he does any other woman.

What then is the cure for his shame? How does he forget himself and his sinful thoughts? Orgasm by various means seems to do the trick, but his one attempt at an emotional connection beyond sex with a sweet co-worker ends in an embarrassing lack of arousal on his part.

A third main character emerges amidst this drama: the city of New York.

Both McQueen and Fassbender have gone out of their way in interviews to state that Shame is in no way intended to be a “New York” movie; if they had had it their way, it would have been set in London. Yet the change in locale, prompted by better funding stateside, has infused the film with such a specific metropolitan connotation that reception of it as a “New York” movie is inevitable. Brandon’s emotional isolation is reflected in his architectural isolation in Manhattan’s various skyscrapers. His whole reason for being in the city is brought to the forefront when Sissy performs a heartbreaking rendition of “New York, New York” at a fancy club.

I want to wake up in a city,
That doesn’t sleep,
To find I’m king of the hill,
Head of the list,
Cream of the crop
At top of the heap.

My little town blues
Are melting away
I’m gonna make a brand new start of it
In old New York.
If I can make it there,
I’d make it anywhere
Come on, come through,
New York, New York. 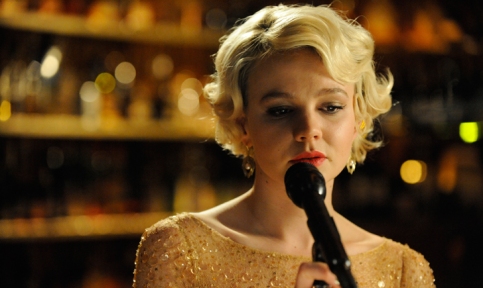 These words are enough to drive Brandon to tears, and it’s not difficult to see why. He escaped to the city, but his past caught up with him and his relationship to New York is now strained to the point of collapse.

The nature of that relationship shapes Shame’s second major narrative thread, and most critics have been apt to describe it as one that enables his sexual compulsions. New York can offer a handsome fellow such as himself just about every sexual opportunity he could possibly want, and it is during the film’s long-dark-night-of-the-soul sequence that he takes it up on nearly every one of them.

He tries to seduce a woman at a bar, but her boyfriend intervenes and beats him up in the alley outside. Unphased, Brandon tries to get into a higher end club but is refused due to his cracked-open face. Now rejected too, he follows an unsmiling, unshaven man into a very different club across the street.

At this point the film makes its turn into a more familiar downward spiral formula. He enters a gay sex club, and it’s here that Shame makes the tired decision to cast Brandon’s bi-curiosity as decadent descent, a red-neon lit labyrinth of unclean pleasures where the suspense hinges on whether or not we’ll see the male protagonist suck dick. It’s an idea we’ve seen in movies like Cruising or Midnight Cowboy[1], and while the idea of him engaging in an activity he would normally find unappealing for the sake of sexual release is fitting within the story, the fact that it’s visually contextualized as sinister ultimately makes it tired and borderline regressive, especially when it’s followed by the soft-focus, warmly-lit hetero-male fantasy of having sex with two women at the same time.

When I watched these scenes in the theater, I was reminded of another movie that dealt frankly with sexuality in New York – John Cameron Mitchell’s Shortbus. While that alone isn’t enough to merit a direct comparison, they both foreground the role of the city in its main characters’ sex lives in such dramatic ways that I couldn’t help but wonder how, exactly, Mitchell’s film won me over so much more than McQueen’s. 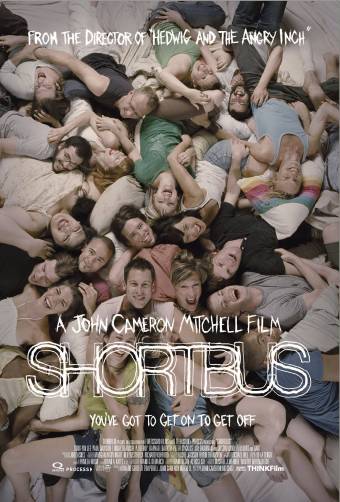 The film achieved notoriety at the time of its release for featuring clearly unsimulated sex, which is somewhat unfortunate considering how much it detracted from critical discussion of the work itself. If Shame is ultimately about one man’s increasingly difficult escape from the past, Shortbus is about an entire city’s desire to heal itself from collective trauma. This is made obvious from the opening minutes of the movie, which open on a colorful miniature of New York City, positing the city as a fantasy landscape in which the characters interact, but one still scarred by the gaping wounds left by the collapse of the World Trade Center towers. Against this backdrop Sofia’s search for orgasm in the time between 9/11 and the 2003 city-wide brownout becomes a metaphor for the completions both physical and emotional the characters seek as reprieve. That it’s sought through sex is inconsequential, much in the same way that Brandon’s escape could have been sought through various other addictions. New York, by virtue of its density and diversity, can facilitate both.

While Shame never seeks to generalize about anything beyond the internal conflict of its protagonist, Shortbus doesn’t hesitate to try to wrangle with the larger issues and draw conclusions. At the titular club, one younger character sits with an elderly man who explains his understanding of New York. 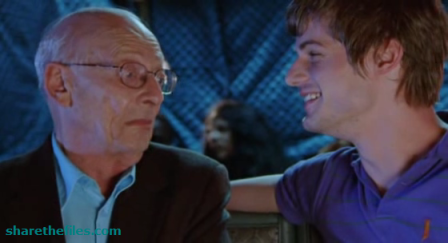 “It’s one of the last places where people are willing to bend over and let in the new. New Yorkers are permeable. Therefore we’re sane. Consequently, we’re the target of the impermeable and the insane. Of course New York is where everyone comes to be forgiven … home can be very unforgiving.”

While the sentiment may be on the nose and even naïve, it is also sincere and possibly true. Intercut with the old man’s monologue is Sofia as she watches a young woman climax. It’s a genuinely beautiful and tender sight, one from which Sofia feels painfully isolated. As she’s nearly brought to tears and the old man lays New York out as a city of hope, I’m reminded of Brandon’s isolation as he watched his sister sing the equally optimistic “New York, New York.” In this sense, both movies present the same overall problem: how can one, harboring so much guilt and pain, possibly form an honest connection with another human being in the modern world? 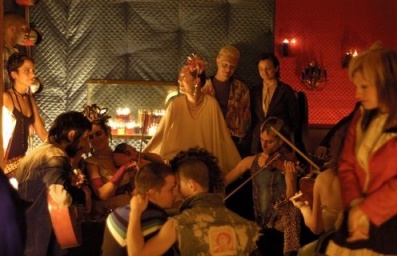 It’s during Sofia’s first trip to Shortbus that someone tells her to feel free just to watch, reminding her, and the audience, that observation is participation. At the end of both Shortbus and Shame I am forced to ask myself what I participated in. With Shortbus, I feel that I participated in an earnest, sometimes contrived, but ultimately honest cinematic search for hope in the very city I’m proud to call my home. It ends with all of the characters and background artists singing at the top of their lungs, “we all get it in the end.” Fatalistic perhaps, but I take the refrain to be an expression of solidarity in the face of strife, national and personal.

With Shame, I feel that I participated in the “downward spiral.” I put it in quotes because that’s what it often felt like in the viewing, a quotation of narrative maneuvers played out in other films of varying degrees of depth. It remains powerfully acted and sleekly executed, but to me Shame ultimately feels hollow. The driving force of the film, the relationship between Brandon and his sister, remains at the margins. While the film didn’t need to be as literal or on the surface as Shortbus, that it couldn’t match that force with anything more than clichéd sexual politics feels like a sorely missed opportunity. What we are left with is another film where the explicitness of the sex is directly proportional to the nihilism of the plot, and honesty is muddled by easy filmic shorthand.

But what you’ve heard is true. Michael Fassbender’s penis is enormous.

For a great movie with a frank, non-judgmental exploration of brother-sister incest, be sure to check out Close My Eyes (1991), starring a very fresh faced Clive Owen, Saskia Reeves and Alan Rickman.

[1] Or parodied in Jay and Silent Bob Strike Back.

This site uses Akismet to reduce spam. Learn how your comment data is processed.

Jon Morris is a failed screen and script writer, failed academic, and soon expecting to be a failed novelist. However, he's also an avid cineaste, a student of philosophy, a devotee of the humanities, a keen political observer, a semi-voracious bibliophile, a history buff, a literate fanboy, and an eloquent writer and scholar. Naturally, all of this makes him completely unemployable in this economy. He has a Bachelor of Fine Arts from the University of Southern California in Screenwriting and a Master of Arts in Cinema Studies from NYU Tisch School of the Arts.